ROM:
Neapolitan flavor ICS 4.03 with Stock Kernel.
Built and compiled from AOSP.
Bits from CM9 and some of my own are included.

This is a totally base ROM with very few modifications added to it once it was done compiling. Does not contain any Google services out of the box. You must add GApps, which can be found below. Your phone will have the most basic Android platform. You can text, surf, talk and do everything else you expect with an Android phone but without any of the Google services. 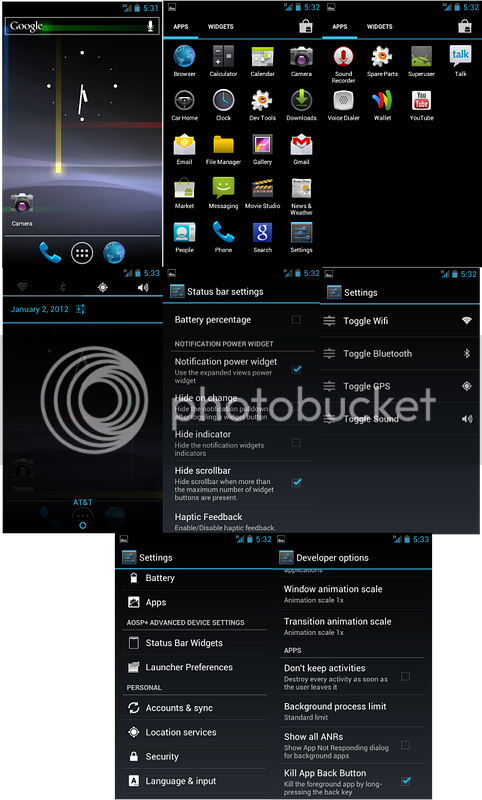 Message from Developer
Thanks to everyone for all of the support and good words about ROM.
Hope you enjoy this one. Busted my ass all day for this. Final product is the same but streamlined build process and ROM. Should feel a tiny bit smoother or it is the placebo effect.
Customized settings package is still a work in progress.
-Status bar widgets customization has not be implemented yet.
-LED Color Notification for Galaxy Nexus needs to be completed.
-AOSP+ Settings BLN features will not work on Galaxy Nexus yet. Work is being done to change those settings to customize LED notifications.

Must have modified kernel for Advanced Device Settings to work. This kernel is completely stock and I suggest you look at this kernel.

GApps - ONLY USE GApps FOR AOSP+

Full Version - Contains all Google services & framework plus many Google apps. Google+, Talk, Voice, Music, Maps, Currents, Video, Video Editor, Wallet, FaceLock, Gmail, Books, YouTube, Market, VoiceSearch and some others. Apps that are not required to be in the system/app folder will be installed in data/app so you can removed the ones you do not want from the Apps setting. ICS Easter Egg videos are included as well as boot animation.

All downloads can be found HERE

From any other ROM not made be me I would suggest to wipe cache & data/factory reset.

From previous versions of AOSP+ it should be safe to install over. Always make a back up in case of something going wrong.

Version 2.0.2 - 12-31-2011
Fixed init.d scripts running at boot.
Cleaned up some code.
Rebuilt from ground up with freshly installed Linux and Development Environment.


Version 2.0.1 - 12-29-2011 - Patch Only Update.
Cleaned up Settings package
Fixed SoundFX so music effects are back. Will render DSPManager useless.


Version 2.0 - 12-29-2011
Rebuilt ROM from ground up again with a cleaner import of code process.
Moved to totally base ROM that GApps is optional.
Cleaned up some code.
Reverted back to stock kernel.
Attempted to fix screen dim issues.
Cleaned up enhanced power menu. Removed the sound/vibrate options. Left screen shot in because it is easier than getting the right button combo

A few more things that I can't recall right now...burnt.
Finally where I want to be were some custom stuff can be done.


Version 1.3 - 12-27-2011
Added
-New Kernel - Using Keren 3.x by eugene373. All details about kernel can be found HERE
-Added options to Settings package for custom settings that will be added soon. For now NSTools has been added to ROM and settings package will take you to NSTools, Thanks arifhn!!!. This is just laying the ground work for better things down the road.

Update Log
Version 2.2.5 - 09-01-12
-Updated AOSP+ Tweaks. Status Bar Widgets Control and Screen light settings can now be found in AOSP+ Tweaks. Links to CM9 Parts for the time being. Please check "About AOSP+" for info
-Cleaned out Android settings package of all files that are no longer required for Status Bar Widget controls.
-Fixed up some settings in Status Bar Widgets Control.
-Finally fixed screen back light dim issues.
-Fixed framework for the behavior of a few status bar widgets.
-Cleaned up some code
-More that I can not think of now cause I am burnt.

Hope you guys enjoy this one. Busted my ass again and it was not a good time

AOSP+ ROM Utility is coming a long nice and we may see a early beta release this week.
Zum Vergrößern anklicken....

Version 2.3 - 12-01-12
-fixed battery percentage, can now turn it on and off.
-modified settings app.
-fixed auto restore - market apps will sync if you so choose.
-cleaned up more code
-removed the 30 step volume, will have add on for those who want it.
-touch to focus on cam app
-more...
Zum Vergrößern anklicken....

where do I start...
Rebuilt once again from ground up included host building OS.
Added:
options to turn off status bar widgets, battery percent and clock.
option to change clock color, AM/PM to display, position and more.
option to have up to 8 shortcuts on lockscreen and ability to customize what those shortcuts are.
Volume keys with screen off to control volume and track playing.
GApps updated - ALWAYS USE LATEST GApps.
Auto restore and market sync are fully working.
so much more crap...my head is spinning from being up for so long...
...will update list later.
Zum Vergrößern anklicken....