So, I'm a themer at heart, and I love MIUI. Sometimes making MIUI themes gets me confused, I have a nice compile script set up for .9.pngs but then the folders and zips and etc etc, sometimes I get a bit overwhelmed and I completely lose myself in what I was doing. So I decided to make a sort of kitchen, resembling dsixda's ROM kitchen.. currently it's still kinda far off, but that is the ultimate goal.

Basically, you take the apks you want to theme and put them in their own folder. Using framework-res.apk and framework-miui-res.apk isn't 100% necessary, but if they're not included, there's a chance the apks will not decompile properly. It will install the two frameworks if they exist, and then decompile all the apks in the folder. It goes into the AndroidManifest.xml file to get the package name (ie com.android.mms) and changes the name of the folder to it. It takes colors.xml and turns it into a theme_values.xml. It then deletes all the extra files that are not needed for a theme, and creates a generic description.xml file. It tells you to edit your pngs, description, and theme_values and run the compiler.

The compiler runs in the same directory, and compiles all the .9.pngs in each separate folder, puts the zips of them with no zip extension into a new "theme" folder, then puts it all together into an mtz in that theme folder.

If you understand MIUI theming, I hope this makes sense. I have a little video showing it off:
v4 Theme Kitchen WIP - YouTube
I plan on prettying it up a little bit more and I want to make a menu to use for future versions.


For linux or possibly cygwin (should run fine in terminal on OSX - untested though) only currently. I'm afraid it's been over a decade since I've messed with batch scripting, and before I go through the hassle of putting together a windows version, I want to have a complete project.

Also, just wanted to say one of the main reasons I'm releasing this tool is because MIUI v4 is changing a lot week to week; sometimes there's new images, sometimes there are new colors in the theme_values. If I made a template, it'd be obsolete in two weeks time

Also, this will work with any* apk for your theming pleasure, not just MIUI apps.


*maybe there's an app it can't decompile. shouldn't be, but be warned

MIUI V4 themes
If you have issues with themes, report in that thread only.


2. The white background bug at file manager and some other settings has been fixed. So you do not have to face the visibility problem (thanks to Treason).

3. Many graphical tweaks in various aspects of the UI.


4. Added an all new lockscreen theme (thanks to Beusse). The theme changes itself every time you lock your device and shows weather animations too.


6. Many other improvements and bug fixes. Do not forget to report any bugs that somehow always creep in stealthily.


Thanks to my friend LiquidRobotics for making the live wallpaper for the theme at my request.

Your comments, suggestions, requests, criticism, or whatever-- always welcome.
Buy me a Coffee to Appreciate My Hard Work

In the meantime here is a quick video (Chinese) giving a demonstration of the MIUI Theme Editor Tool.

After much anticipation for the release of more MiHome Free Desktop themes, we are happy to announce that the Warm Space theme which was featured in the promotional video several weeks ago is now available for download!

This Free desktop theme is just awesome, we're really impressed with the work put in on this by Xiaomi and really do hope to see Theme developers open their creative minds up to develop some amazing Free desktop themes! 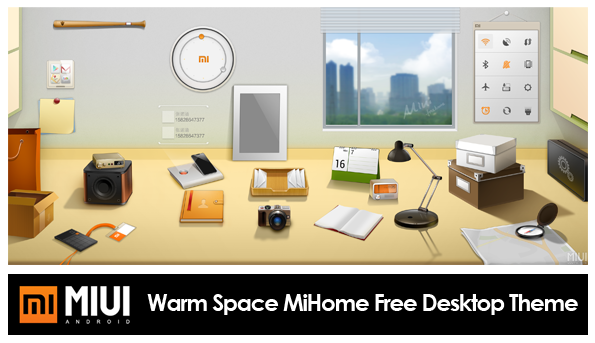