As with previous versions, Android Q includes behavior changes to help improve performance, battery life, security, and privacy. In some cases, these can affect apps until they are updated to support Android Q, so you might see issues ranging from minor to signficant. In general, most apps work as expected, but please review the known issues listed below to get a better idea of what to expect from Android Q Beta 4.

You can install this release on any Pixel device or any of the devices from our partners that are listed as supporting Beta 4 in the Android Q Beta devices page. Updated Beta 4 GSI system images are also available to help you with testing. If you don’t have a physical device, you can test using the Android emulator. See Get Android Q for details on how to get started with Android Q Beta 4.

General advisories
Please be aware of these general notes about the release:
Top issues for users
Note the following top user-facing issues.

Some apps and games that depend on DRM or security libraries might crash due to a change to Bionic libraries and dynamic linker paths in Android Q. App and library developers should read more detailed information in the Behavior Changes for All Apps.

Permissions
Android Enterprise
Known issues, Google apps
Based on our testing, you might encounter functional issues while using the Google apps below on Beta 4. These issues are already known, so there’s no need to file issue additional reports for similar issues.

Google Photos
Google Photos on Android Q Beta 4 may send the wrong metadata for videos to the Photos service, which can cause issues with timestamps and affect the ordering of videos in the gallery. This issue will be addressed by an upcoming app update.

YouTube
The YouTube app may not display picture-in-picture window as expected when gestural navigation mode is enabled on the device.
Zum Vergrößern anklicken.... 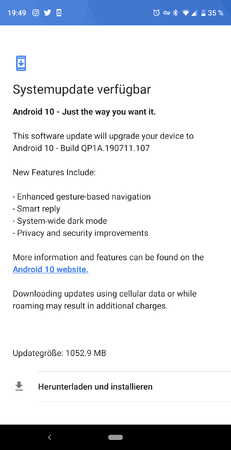