I'm new here. I hope you don't mind if i write in english as this forum is in german language. Anyway I understand german well enough.

On friday I've bought Xelio in Conrad store. What I've noticed since beginning is very weak wifi signal. I've tried many things... chaning wifi channel, changing position of router, resetting Xelio etc... but no success.
I even saw that if I'm next to wifi router that on Xelio wifi signal is not full.

With wifi analyzer I've tested Odys Xelio, Odys Loox and Samsung Galaxy 5 to compare wifi signal. You can see it in attached image. 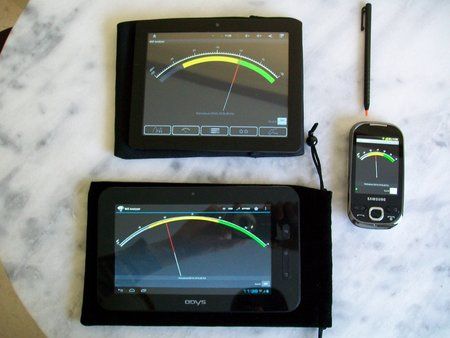 Does anybody also have this kind of problems?

Loox and Xelio uses the same wifi-chip, a Realtek RTL8188.

In case of the Xelio the receiving aerial may not have an optimal position.
That means there will be no improvement without opening the tab...

Threadstarter
Hello
I think it's not the hardware problem. there gotta be software issue. it happened to me that wifi crashed, sometimes when i'm next to router wifi signal bar drops to two lines and i'm not holding the device in my hand, sometimes wifi just doesn't work and you have to restart android to get it back to work. i feel that this is wifi driver issue and not something connected with hardware.
i also don't understand how xelio has same wifi chipset as loox if loox supports wifi b,g and n but xelio only b and g. where did you checked chipset?

There need to be some improvement because android 4.0 is pretty fresh and it has many issues. I'm using Linux otherwise and even on same chipset can sometimes be problems and other time everything works... is mixture of driver quality and Linux kernel release.

Do you think that Odys team read this forum? I wrote them email about this issue yesterday. More response they will get sooner they will fix the problem.


At least I can say that Odys team made great job about Xelio tablet. And I don't believe that they've released product with hardware issue. Why i think so? Because they've puted attention to many other details in this product and would be really shame for them to ship it with faulty wifi
In this case Apple would say that you are holding your device wrong or that it's not the tablet, its you Check which problems are with new ipad 3 ...

victorxyz schrieb:
i also don't understand how xelio has same wifi chipset as loox if loox supports wifi b,g and n but xelio only b and g. where did you checked chipset?
Zum Vergrößern anklicken....

You can check this out in the hardware thread ;-)

I have the same issue. No or bad signal in my living room where there's no problem with my ZTE Blade or my former Odys Loox.
I asked Odys via Facebook for help. Hopefully they will reply on one of our contact attempts...
P

So there will be some solution after all.
P

Haha as we all wish maybe they are just lying to calm you down...