Samsung is committed to providing customers with the best mobile experience by continuously offering an operating system upgrade for its devices. As part of this effort, Samsung has recently provided the Jelly Bean 4.1 upgrade for the Galaxy S III, and will bring even more enhanced features to the phone through the upcoming Premium Suite upgrade. Consumers around the world have already enjoyed the elegant intelligence that the Galaxy S III brings to their lives and the Premium Suite package takes this to a higher level.

The Galaxy S III Premium Suite upgrade will include many of the innovative and productive features newly introduced by the Galaxy Note II:

Group Cast: With Group Cast on the Galaxy S III and a Wi-Fi network, share and collaborate on documents, presentations or images in real-time with multiple friends or colleagues without loading the file separately. This is now a stand-alone app, rather than part of Allshare Play, making it is easier to access.

Camera Enhancements:
· With the new 'Best Face' feature, an improved version of the previous Best Photo feature, choose from five continuous shots the best face of each person in the photo, to create an image that satisfies everyone
· Low light mode is added to allow bright and sharp photos to be captured even in dark places
· Capture amazing scenery by using Panorama mode, now expanded to 340~360-degree

Other advanced and convenient features on the Galaxy S III.
· Continuous Input: Using one continuous finger/stylus motion across the keyboard, users can type words faster and easier
· AllShare Cast: Wirelessly connect the Galaxy S III to the television to immediately transfer smartphone content onto a larger display
· Smart Dock: TouchWiz interface allows people to adjust the phone setting to automatically switch to a relevant UI when a device is connected to the docking station
· Improved touch response: Enjoy even faster and smoother touch response on the Galaxy S III
· S Beam: By simply touching another S Beam-enabled device including Galaxy Note II and Galaxy S III mini, the Galaxy S III allows a 1GB movie file to be shared within three minutes and a 10MB music file within two seconds, even without a Wi-Fi or cellular signal 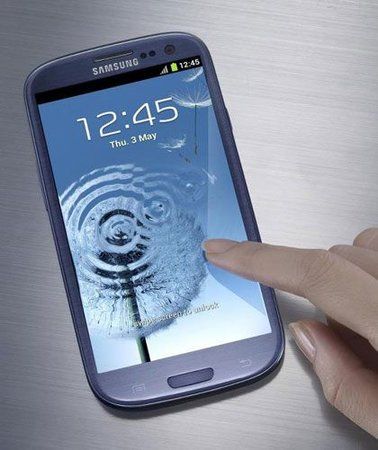