The integration of Android Auto promises to add yet another dimension to the Volvo in-car experience. Android Auto brings features and services familiar to Android smartphone and tablet users directly into the car via Volvo Cars' large centre console touch screen display.

"Google's approach to user-centricity and the application of technology to improve peoples' everyday lives makes Android Auto a perfect addition to the Volvo experience," says Håkan Samuelsson, President and CEO of Volvo Cars.

The interaction between Android Auto and Volvo Cars' brand new user interface transforms the look and feel of a car's interior. Volvo Cars' interiors will be characterised by their high-tech simplicity and functionality.

"We have worked hard to ensure an enjoyable user experience with Android Auto. This will offer our customers a new degree of fluidity and accessibility in the usage of their mobile devices, and bring the digital ecosystem our customers already enjoy into the car, complementing Volvo Cars' existing connected car services and applications," says Håkan Samuelsson.

Android Auto will provide access to Google Search, Google Maps, Google Play Music and specially adapted third party applications, such as Spotify. All phone-based applications can be controlled via voice or steering wheel controls or the car's touch screen ensuring the entire interaction with Android Auto content is both safe and easy.

Volvo Cars' portrait touch screen provides users with the benefit of having both Volvo Cars and Android Auto content on the screen simultaneously, removing the need to switch between car and Android phone screens.

"Android smartphone users will feel completely at home in a new Volvo. We have created a wholly-integrated user experience in our large portrait-oriented touch screen that takes the in-car mobile device experience to a new level. That, coupled with the obvious driver safety benefits of an advanced voice control system offered by Google, made Android Auto a perfect match for Volvo," says Håkan Samuelsson.

Android Auto will be available on all new Volvo cars based on the new Scalable Product Architecture (SPA), starting with the all-new XC90, due to be publically revealed at this year's Paris Motor Show.

Volvo Cars will also include Apple CarPlay interoperability in all new models based on the new Scalable Product Architecture. This will make it possible for Volvo car drivers to connect the most widely used smartphone platforms directly to their car's touch screen display.
Audi Plans to Begin Introducing Android Auto Connection Into Vehicles in 2015

Android Auto will provide a seamless link for Android mobile car apps to function through the Audi MMI® infotainment system
Motorists will be able to project apps and services optimized for voice commands and the driving environment
Android Auto is the first innovation to come from the Open Automotive Alliance, a coalition of tech companies and auto industry leaders committed to bringing the Android platform to cars
Audi, through its role as a founding member of the Open Automotive Alliance, plans to begin introducing Android Auto technology with all-new models launched in 2015.
Android Auto debuted today at the 2014 Google I/O annual technology conference in San Francisco as the first innovation resulting from OAA, a global alliance launched in January by Google, NVIDIA, Audi and three other automakers to extend the Android platform into cars.

With Android Auto, drivers will be able to seamlessly access their Android device car apps using Audi MMI displays and controls optimized for safe and intuitive operation on the road. The OAA is dedicated to building an open ecosystem around a common platform in order to drive innovation in the car, allowing automakers to deliver cutting-edge technology more quickly to drivers.

"As the leader in the emerging field of connected car technologies, Audi recognizes the importance of meeting our customers' mobile technology needs on their terms," said Ricky Hudi, Head of Development Electrics/Electronics, AUDI AG. "But we should only do this through innovations, such as Android Auto, that reduce distractions and improve performance."

Personal transportation and the personal need to stay informed are two crucial components of everyday life fulfilled by cars and mobile phones. Android Auto helps motorists move the access point for information from the palm of their hand to the built-in displays of their cars allowing hands to remain on the steering wheel and eyes on the road.

After connecting an Android smartphone in a compatible Audi, drivers will see a prompt asking if they want their apps to function through the MMI touch display and controls. The graphics and audio streams, including microphone input and all control interfaces, will then operate with Android Auto which is seamlessly integrated into the Audi MMI mobile media application framework developed by the Audi software joint venture e.solutions on top of the QNX Car automotive operating system.

Apps showing multimedia video content or text heavy displays will be disabled while the car is in motion, a feature that is standard in all Audi MMI systems. Drivers can easily switch from the Android view and the Audi infotainment functions as desired, or upon disconnecting their Android phone.

The addition of Android Auto in forthcoming models will not make Audi models incompatible with other smartphones. Audi has a proven track record of improving the integrated access to mobile devices in its vehicles while focusing first on avoiding distractions for drivers. 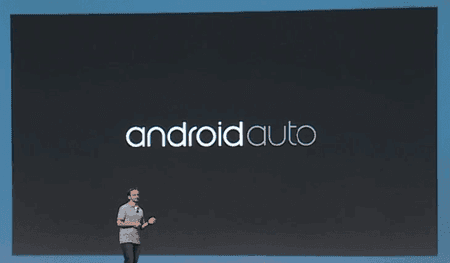