Version 34.3:
The ZRam control is found in the I/O Tab in STweaks. Set it to 0 to turn it off completely, any other value to turn swap on. Changing value takes about ~10-20 seconds depending how loaded the disk is with swap pages so don't piss your pants if it doesn't react immediately.


Changelog schrieb:
 Further rewrote the in-kernel audio controls:
- Threw out the old detection methods for something more robust.
- This particularly enables non-cellular applications such as Skype, Viber, and so on to be detected correctly. A "calling" state now includes any and all use-cases where the audio is outputted via the phone's earpiece. This fixes microphone levels for such apps to correctly use the calling sensitivity value.
- Added microphone level for camera use, this state is enabled whenever a camera stream is active. It should give more options into adjusting things to your likings.
- By now the sound engine has only little similarities to Boeffla, any bugs and feedback now go directly to me.
 Developers only: MHS: Added a new small tool for tracking media use and reporting it to other in-kernel drivers. Capable of detecting video recording, decoding and camera streams for now. See commit for more info.
 mDNIe control changes:
- Removed several controls in STweaks simply because people misunderstood them or misused them, or they simply had no rational use.
- Video detection, now with the help of MHS, is no longer limited to the stock video player. Any video players using hardware decoding will now be able to make use of edge enhancement, HDR and DNR, this includes any web-based players and the YouTube app.
 Custom LED controls implemented; Exposed most variable controls for the notification LED via sysfs and STweaks (LED tab). :
- Control LED brightness. Currently the OS dictates, depending on brightness detected by the light-sensor, wether to run the LED in a low-power mode or in a high-power mode, you can now set brightness for both.
- Blinking control, this is basically the shape of the wave-pattern that the LED blinks in, you have several controls, best described the data-sheet description: 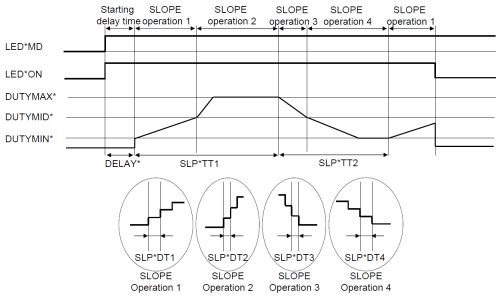 - The fade-in time period is TT1 in the graph, while the fade-out period is TT2.
- Slope (1/2/3/4) detention time represents DT1,2,3,4 in the graph, it controls how "steep" the four different curves are.
- The LED fading checkbox simply switches between having the detention times controlled by the sliders to having them to 0 (Stock blinking behaviour).
 Increased default zRAM size to 400mB. This won't override your STweaks setting, so only new users will see the new value. Other please adjust manually to your liking.
Zum Vergrößern anklicken....